Have you heard of the Shotel? Somewhat lesser known in the sword history world, the Shotel is a curved blade of around 40 inches or 1 meter in length, dating back to 980 BC to Abyssinia -- modern day Ethiopia. It was used as recently as the 1800s. Its extreme curved shape drew a lot of attention, elevating the carrier's status with its impressive size and make, as well as a hook-and-stab style of weapon in close combat.

It's intimidating and fierce-looking: Double-edged, plainly decorated and generally with a simple handle. Unlike some other swords of the time, Shotels don't seem to have been highly decorated -- usually minimal engraving or embossing was employed, and handles were usually made of rhino horn or wood. Sword Blocker and Shield Hooker... with an Awkward Side

Due to its shape, the Shotel was extremely difficult to block, even with a shield. Assuming the wielder had great wrist control -- which they often did, given the Shotel's make and their training -- the Shotel allowed the wielder to fend away blocking swords and manoeuvre around opponents' shields, making it a fierce weapon in close combat. The goal was often to attack in a hooking motion -- usually whilst dismounted -- and reach around the enemy's shield to attack them in the kidneys or lungs. 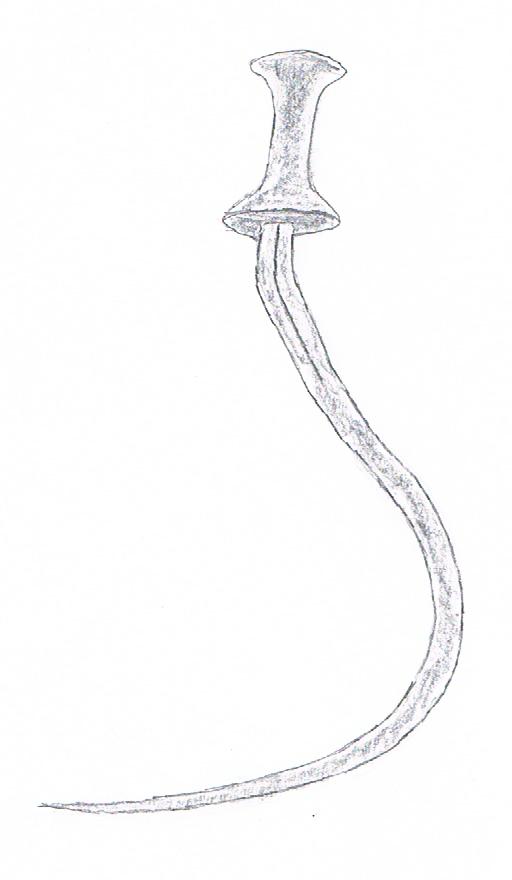 That said, its awkward shape also came with a downside: The handle was small in comparison to the long, heavy and distinctly-shaped blade, meaning it was difficult to aim and hard to control in a swinging motion.

Not to mention -- just getting the curved sword out of its scabbard was tough, due to the curved shape. The scabbard also needed to be about a foot longer than the sword, making it huge and hard to carry.

As such, the weapon was eventually retired in favour of more traditional, straighter swords that were easier to carry and manoeuvre in battle. However, many were still retained by warriors and nobility for ornamental purposes.

The Shotel is believed to be a close relative of the Kopesh and the scimitar.